We found 16 Reddit mentions of Nizoral A-D Anti-Dandruff Shampoo 4 fl. oz. Here are the top ones. 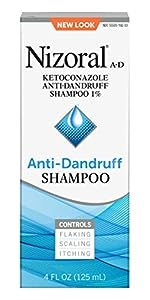 Wash with Ketoconazole shampoo (use it like body wash on the rash) twice daily. Change your clothes every day. Don't use the same towel that you used on the rash to dry the rest of your body. Also, (obviously) do all the stuff the doctor told you. Most people don't know about the shampoo and it can speed up recovery quite a bit.

I had a similar situation where my scalp was just really really dry. Not dandruff, per se, but no matter what I'd have some flakes towards the front of my scalp for probably about a year on and off. I purchased this shampoo on Amazon and after 4-5 times washing my hair with it the flakes completely went away!!! I still have about 2/3 of the bottle left and if the flakes ever come back I know this stuff will do that trick. Hope this helps!

This is the one I use. I use the 2% one here and there and I would describe that one as having a "terrible muscle inury balm" smell to it. So maybe it's that?

I go through period of times where my scalp gets really itchy and flaky. My doctor told me about Nizoral Shampoo years ago and it’s the only thing I use when my scalp starts to act up. Life saver!

I recommend trying a ketoconazole shampoo (if you haven't already) and going sulfate-free. For example, a solid routine for active dandruff is Nizoral (1% ketoconazole) a couple times a week and a sulfate-free shampoo like Free &amp; Clear on the days you aren't using Nizoral. Once the active flare up is under control, you can cut back to one application of Nizoral per week for maintenance and then ultimately replace it with Free &amp; Clear Medicated (2% zinc pyrithione - essentially sulfate-free Head &amp; Shoulders).

I used this approach with my last flare up almost 2 years ago, and I haven't had a problem since. I probably only use Free &amp; Clear Medicated every other week or so at this point. Previously, I had been to a derm who prescribed me a 4% ketoconazole shampoo, but I didn't get sustainable results until I switched my "normal" shampoo to a super gentle, sulfate-free option.

I had the exact same problem at the 2 week mark. I asked my derm if they could recommend anything and they prescribed me ketoconazole shampoo (2%). Worked like a charm.

If your derm for some reason won't/can't, you can buy Nizoral shampoo, which is also ketoconazole (1% though)

&gt; I apparently have mild allergies to yeast, bread and the like (which is interesting since it's theorized that an overzealous skin-yeast might be one cause of SD)

Yeast does not just mean the stuff you use to make bread. The yeasts that can contribute to skin problems are totally different than Saccharomyces cerevisiae, the yeast used for bread and beer brewing. There are hundreds of different types of fungi that can colonize your skin, Saccharomyces isn't one of them. I'm a medical mycologist, sorry, but it's a big pet peeve of mine!

For OP: Nizoral is also a really good one to use for SD. I also have it and have found a few things that really make a difference. First, SD can be caused by over production of oils. We often react to what looks like dry flakey skin by using heavy moisturizers and things like that when we need to dial back a bit. My dermatologist recommended Free and Clear products for me. They make a facial cleanser and moisturizer. Also, drink a lot of water and wash your face twice a day. I find that if I skip a washing, it makes it worse. Hope this helps!

This has been the best thing that I've tried. It still gives me dry flaky scalp like any other shampoo, but it seems to subside the amount of flakes and itchiness. Much better than "head &amp; shoulders" brand which I think is a joke.

You can try using Nizoral dandruff shampoo. It is different then head and shoulders (it get rid of fungus). I get dandruff every so often and this usually helps.

Nizoral shampoo has been a blessing. Would highly recommend.

Although I haven't used this personally, it seems to have excellent reviews. I learned about from the skincare subreddit as its active ingredient - ketoconazole, addresses the fungus that causes dandruff, the same fungus responsible for fungal acne.

Have you seen a dermatologist? I really think the spots where no hair is growing warrants a trip to the dermatologist, they can prescribe you prescription strength topicals that would likely help.

My two favorites are Free and Clear dandruff shampoo and Nizoral. They both work well for me. The active ingredient in the Free and Clear shampoo is pyrithione zinc, the same stuff that's in head and shoulders, and it's sulfate free. Nizoral's active ingredient is ketoconazole, which is what's used in most prescription dandruff shampoos. It does have sulfates in it, but they make up a much smaller percentage of this formula than they do most sulfate shampoos (listed in the bottom 5 ingredients), and it doesn't leave my hair feeling stripped.

Fwiw, I've tried several shampoos that didn't help. As I Am has an itchy scalp shampoo that actually caused flare ups for me, which I'm blaming on the olive oil in the formula. Jason natural dandruff relief didn't seem to do much either way - even though my skin historically responds really well to sulfur and salicylic acid, this one also had olive oil, and that negated whatever good the active ingredients were doing. Wish I could try the Shea Moisture dandruff shampoo, but that one has olive oil in it too :(

I've tried Neutrogena T/Sal a few times and always got too frustrated to stick with it. I think it would work for me, but it's really thick, which made it such a pain in the ass to get it distributed evenly on my scalp. I also suspect that (at least for me) it takes longer to see results with salicylic acid than with some other anti-dandruff ingredients.

&gt; Nizoral shampoo
I guess the shampoo sounds like the safest one? Is this it?:
https://www.amazon.com/Nizoral-Anti-Dandruff-Shampoo-4-oz/dp/B0000Y3CRY?th=1