We found 11 Reddit mentions of SentrySafe 0500 Fireproof Box with Key Lock, 0.15 Cubic Feet. Here are the top ones. 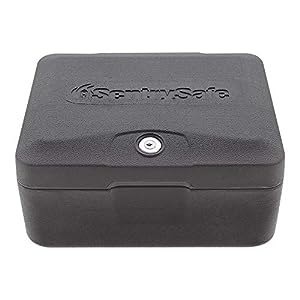 just as an aside, get a hold of all of your personal documents, birth certificate, ssn card, passport if you have, immunization records if you have, car title, etc., this should no longer be in the hands of your parents. And buy a fireproof box to keep them in, this is what you grab first if your place ever catches fire.

You need a fire safe. Yes, you do. You need renter's insurance on your apartment, and a fire safe. It's $30. Put in your birth certificate, your passport, any relevant medical documentation, the title to your car, your "good" jewelry, and any cash you might otherwise leave lying around. You're an adult, this is a piece of adult hardware that you need.

I'm going to assume you're living in a dorm. Dorm living can be a real beast, especially if you're on a floor where you share a bathroom. Things that can make it much more comfortable:

May I ask what safe you bought?

Was is something cheaper like this? Specs only rate it for 30 minutes at 1550°f.

Or something slightly more expensive and larger like this? Specs slightly better at 1 hour at 1700°f/927°C.

I'd expect it takes longer than 1 hour to completely burn a house down. So I doubt either safe contents would last. But I thought I'd ask to be sure. I own the second safe I linked, but I have it mainly for burglary, flooding, and smaller fires. Not completely burnt down houses.

I don't recommend electronic safes unless you are spending big money, most have a severe venerability to magnet opening the solenoid. Save your money and buy the standard combination dial with the extra key. Unless you don't care about the burglary aspect and only want a safe for fire and flooding. It's less convenient, but means a burglar would have to take longer than 5 seconds to open your safe. All safes are able to be broken into, you just want to slow them down as long as possible.

Edit: According to Google, most house fires seem to only reach 1100°f, so it's probably the length it burns for. Though the added part of a forest fire might increase temperatures. For normal house fires where firefighters can actively try and stop it these safes might stand up to the heat, but with no firefighters combating the house fires as the forest fire was too large they really don't stand a chance. They also recommend storing it on a concrete basement if you have it, and next to any metal that won't burn like a furnace. That way it's getting heat from less areas and will last longer.

I keep my irreplaceable photos in fireproof safes. I find they fit quite a lot of photos in them. They aren't super cheap but i don't find them unreasonable given that the photos are irreplaceable. I also leave the key in the lock so that if a burglar ever broke in they could open it and realize it's just pictures haha.

Edited to add that i might have provided a link to a very small one and it might be worth checking sizes out at a store.

Here's a link to one but you can find them at Walmart, Target, Staples, etc.

It's time to start watching out for your stuff.

First, get a cheap fireproof safe. This one is pretty good quality and won't get opened easily. You may need something bigger. Try a second-hand store and ask for lockboxes and fire safes.

Next, make sure you can find your safe if someone steals the whole thing. Also, bicycle chain lock it to something solid.

Then keep your room safe. Buy a lock for the door when you're not there, and get a room alarm for when you ARE there and someone thinks they can sneak in on you.

Last, find a good hiding place for your stuff - even if you have to make one.

Find a place where you can hide your safe where people don't think to look. Does your house have wood floors &amp; carpet? Time to pull up a corner and see if you can loosen (or saw through) a floorboard.

Shared expenses-an app, some poster board with the info written on a way..something in written form (be in an app or otherwise)

Something like that. There are different styles and sizes and prices. Good place to stash loose cash/valuables you don't want stolen/lost/apartment catches on fire.

If I win I'd love this and this

Albeit small, it's $22 bucks faggots