We found 22 Reddit mentions of Sound Blaster Play! 3 External USB Sound Adapter for Windows and Mac. Plug and Play (No Drivers Required). Upgrade to 24-bit 96khz Playback. Here are the top ones. 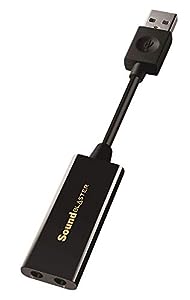 Not necessary unless you're having problems using it with your computer or phone (like if you hear a noise when it's plugged in, or if it's not playing lossless/high bitrate streams in a quality that's higher than normal).

There are lots of cheap USB dacs on Amazon you could try if you think this might apply to you.

Here's one that's USB-A for PC.

These are powered speakers with USB inputs - $350/Pr Retail -

How important is USB to you? That's a nice feature, but only if you need it.

If there is a replacement model that means there are probably very good deals on the Older Version.

These are 5" speaker, and to make a determination, you have to consider what else you can get for a similar price.

There is nothing wrong with the Edifier, assuming they do what you need done.

The one advantage the Klipsch do have is that they have a USB input for direct connect to a computer. That is probably the feature that is the deciding factor. However, if you computer has an Optical or Coaxial Output, then something like the Edifiers 2000 might be a good choice.

Or, if you are not connecting to a computer, then USB becomes less valuable. In the case, the Edifier with Optical/Coaxial/AUX and Bluetooth is a better choice, simply because it has a Remote Control.

The various Mackie and JBL in 5", 6.5", and 8" could be a good choice as they are highly rated and are less money, but they would require you to buy a USB DAC. Though these can be had in the range of $100.

Some of these are USB DACs and Headphone Amps.

You can check reviews on line and you will find nothing but positive for both the JBL and the Mackie MR Series.

All that said, nothing wrong with the Klipsch, just make sure they do what you want, suit your application, and fit your budget.

Just a range of possibilities

you have a couple ways of dealing with the audio from the PC to the amp.

the cheapest - and it works fine for me - is to get decentish usb sound card, and a 3.5mm &gt;&gt; RCA cable

or if you're cheaper https://www.amazon.com/Plugable-Headphone-Microphone-Aluminum-Compatible/dp/B00NMXY2MO/

you make the longer run in a USB cable, and keep the sound card near the amp. so your analog path is short.

the issue will be if you want surround sound, since i'm not sure all usb DACs support that.

i'm not familiar enough w/surround sound to really advise on that front.

Your headset uses a 3.5mm 4-pole jack. 1 wire each for the left, the right, the microphone, and the ground.

Does your laptop have 2 3.5mm holes? If so, they're probably 3-pole jacks. The headphone jack has a left, right, and ground; and the microphone jack has an input and a separate ground. You'll need a splitter to split the headphones and microphone, like this.

If your laptop only has 1 hole, then it probably doesn't have microphone input, or it isn't working. You can still get a USB adapter that accepts 4-pole like this.

And just to make sure, plug your headset into a phone with a 3.5mm jack to see if it recognizes as a headset and the mic works. Hope this helps.

I've had a pack of 10 generic electret mics resembling this (that I got for like $1 each) lying around since 2010, and tonight I used them along with the $18 Soundblaster Play 3 (which supplies the mics with 2.7VDC by default so I didn't need to deal with bias supplies) and a Pi Zero to test the Solo acoustic datalogger project by James Christie and Robbie Whytock which worked awesome and just saved my ass.

Last Friday I needed to build a stable platform to autonomously acquire a month of hydrophone data from a remote field site, on 3 days notice, and purely because of those guys' work on Solo I just pulled that shit off like a boss...


So check out Solo and dig into their repo if you haven't already, that $18 SB3 interface they spec along with my dirt-cheap condensers are evidently capable of scientific-grade audio capture with pretty much zero dicking around.

For affordable reference mics on a slightly more serious level I highly recommend these bad boys from Dayton. Those are also just generic condensers worth no more than a few bucks each, except the lab calibration data included with each mic would cost me a hell of a lot more than the $70 they ask. But for what you're doing I bet a standard cheap lavalier mic powered off the SB3 bias supply will work surprisingly well.


Good luck and have fun!

Nice, you have the same setup I wanted. I already have the vive 'n' chill running and was looking for what usb c OTG worked for others for two outputs.

EDIT: Any idea if it shows up as a passthrough device or not? I kind of want to try a nicer DAC like this or this but not sure if drivers will be an issue on the latter.

I just got the SMSL SD793-II and it works well! No complaints so far. However, if you want to use a mic I would recommend this . I use that as well and mic is clear. Good vid from Zeos on the SMSL here

Were you sending audio through the 3.5 mm headphone jack (green) from your motherboard to your soundbar?

If so, to replace that, as Lori2806 pointed out, a USB audio interface is your best option. If you only care about audio playback and not recording, I'd get something like this:

The quality will vary depending on the onboard DAC, the Creative Labs one at $20 seems good bang for buck. From looking at the reviews, sounds like you could end up with some hiss but you can fix that by disabling unused sound channels in the Creative Labs software.

Note, USB audio interfaces act funny with Windows 8+ when the computer goes to sleep and if you had any browsers still running that had audio playback paused. You sometimes have to go into the Sound Playback window and disable/re-enable the USB device in that list for everything to work again. Minor annoyance, but bears being mentioned.

If you're gaming and already have a headset with a mic, you may want to look into buying a PCIe sound card or a USB DAC intended for gaming use (most arent cheap).

You can of course go with a JustBoom Amp Hat to produce stereo output up to about 55w. Using this output you can connect to a factory amplifier using a car stereo wiring harness (this is how I am powering my 11 speakers in my 2004 Dodge Durango with Infinity Sound).

Alternately you could go with a simple DAC Hat such as the Hi-Fi Berry (linked above) or the JustBoom DAC Hat to provide output to a sound processor or multi-channel amplifier. As I upgrade my speakers, I will be adding a sound processor and multiple amplifiers to drive all the speakers and some larger subwoofers.

A third option is to use a 3.5mm to RCA connector for our sound output from the Pi or secondary DAC (USB or Hat) with 3.5mm output. The Soundblaster Play! 3 is plug and play and works great for this application. From the RCA output you can connect sound processors and/or amplifiers to power your system.

To answer your question, your phone does the largest portion of the processing and provides the "source" for audio/video output which is transmitted via the USB cable to the Pi where Android Auto utilizes the Pi hardware to output the display and sound through your configured paths.

Are you talking about the front of your PC case? If the control panel can detect them as two devices, I would think the app the user mentioned below might work. I used to have razer tiamats with a built in switch which was awesome. They broke and I needed a way to switch easy and started using https://audioswit.ch/er. For a hardware solution, this usb dongle might be the cheapest, or you could go with a USB DAC

the X2 gains no advantage from any of those components. it was designed and is meant to be used directly connected to low powered mobile devices.

a $20 Sound Blaster PLAY! 3 would be all you need for this setup.

This one is a good one:

Hi, i need help with this setup.

I have a ps4 slim, and i want to connect it to my PC speakers, which only has a 3.5mm. PS4 slim only has a usb port to connect to. So i was planning to get a USB DAC to do the trick. The options i have is to get a DAC, and 3.5mm extender. Will this work? WIll there be a loss in quality, loudness or extra noise?

Also, I have 2 options which are on Sale, can someone tell the difference between the two, SBX Pro Studio vs X-Plus. Is any of the two better? I only play on speakers, not really care for things like footstep accuracy but prefer a cinematic feel.

Without soldering probably not. You’ll have to get a usb interface if it’s broken.

I am looking to buy a DAC (budget around $30) for my laptop as the sound quality is inferior to my iPhone. I am mainly going to use my RHA ma750i for listening.

I've looked at several of them on Amazon and most are too expensive for me. I just want to have the same music quality experience as my iPhone.

They seem convenient, portable and quite easy to carry.

If you guys know of better DACs in the same price range, please let me know. Thanks.