Reddit mentions of A Million Random Digits with 100,000 Normal Deviates

We found 64 Reddit mentions of A Million Random Digits with 100,000 Normal Deviates. Here are the top ones. 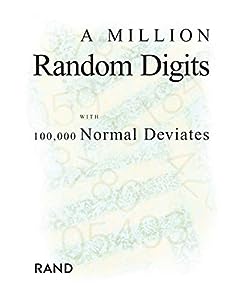 Found 64 comments on A Million Random Digits with 100,000 Normal Deviates:

The reviews for that book on Amazon are worth a read. :)

I never thought I would see the day that A858DE45F56D9BC9 would plagiarize, but this was taken digit-for-digit from RAND's A Million Random Digits with 100,000 Normal Deviates.

As for boring, there is a certain publication from the RAND Corporation you could look into.

I knew Amazon reviews were subject to the occasional troll/subversion, but I never knew the extent of it and the craftsmanship put in. From one of those WTF products, A Million Random Digits with 100,000 Normal Deviates [Paperback]:

&gt; 1 Star - Sloppy., July 27, 2005
The book is a promising reference concept, but the execution is somewhat sloppy. Whatever algorithm they used was not fully tested. The bulk of each page seems random enough. However at the lower left and lower right of alternate pages, the number is found to increment directly.

That is just superb.

The absolutely best thing about this post are the customer reviews on a list of random numbers book on Amazon that was linked.

I get my randomness the old fashioned way

&gt;So if DF is telling the truth, Valve lied to the community...

DF is wrong when he says "the random chance is all BS." There's nothing mutually exclusive about "random" and "pre-determined."

If you roll dice, you get random numbers; if you write those numbers down, they're still random numbers. This was, in fact, the old school way of using random numbers for all sorts of stats problems.

To expand on this, the quality of randomness you need depends on what you want to use it for. For simulations, you just want something that appears uniform, but it would be perfectly fine for it to be prerecorded on a big hard drive and therefore widely known, which is why this exists.

For cryptography, on the other hand, you want something which is random to an adversary, so contingent on the information an adversary might have or be able to obtain, you should have a process to produce numbers which are unpredictable to them.

If you're a math geek, just about every review on Amazon for A Million Random Digits with 100,000 Normal Deviates is absolute gold.

&gt;Such a terrific reference work! But with so many terrific random digits, it's a shame they didn't sort them, to make it easier to find the one you're looking for.

&gt;The book is a promising reference concept, but the execution is somewhat sloppy. Whatever generator they used was not fully tested. The bulk of each page seems random enough. However at the lower left and lower right of alternate pages, the number is found to increment directly.

&gt;I had a hard time getting into this book. The profanity was jarring and stilted, not at all how people really talk. Frankly, the book came off as strictly workshop material. But after about 50 pages, I found myself immersed in the style. What had been stilted became lyrical and engaging. Authors go entire lifetimes without matching the poetry of couplets such as those of Mr. Rand Corporation. I can only wish I had thought of 41145 42820.

It's the show where you never know what's up next: The RAND Corporation's 'A Million Random Digits'

To paraphrase a review I remember of A Million Random Digits:

&gt; I expected a million random digits, but was disappointed to find only the numbers 0-9, repeated in unending combinations.

&gt; "The book is a promising reference concept, but the execution is somewhat sloppy. Whatever generator they used was not fully tested. The bulk of each page seems random enough. However at the lower left and lower right of alternate pages, the number is found to increment directly. "

The reviews on Amazon are amazing: http://www.amazon.com/Million-Random-Digits-Normal-Deviates/product-reviews/0833030477/ref=cm_cr_dp_see_all_btm?ie=UTF8&amp;amp;showViewpoints=1&amp;amp;sortBy=bySubmissionDateDescending

The Amazon reviews of this book are great.

A Million Random Digits with 100,000 Normal Deviates by Mr. Rand Corporation. Very strange author, Mr. Corporation. I've read it multiple times and still can't make head or tail of it, particularly p. 15. Some people swear by it though. These people are the same kind of people who think House of Leaves was good too.

Hey look, I found a budget plan that's more accurate than the GOP's

Obviously, you aren't up on your Amazon reviews. Exhibit A: https://www.amazon.com/Million-Random-Digits-Normal-Deviates/product-reviews/0833030477/ref=cm_cr_dp_d_acr_sr?ie=UTF8&amp;amp;reviewerType=avp_only_reviews.

You can still buy random on Amazon.

Edit: in fact, you can also get it free from the horse's mouth.

A fun side note - read the reviews of this book:

You know this one started slow, but by about page 500 it genuinely does pick up quite a bit.

That's nothing compared to this book. Just look at the reviews!

"As our hotel accommodates guests of all faiths, we shall no longer carry books of faith with reassuring and positive messages that imply order, such as the bible and the q'ran. Instead, we have made available A Million Random Digits with 100,000 Normal Deviates to reassure our guests that the universe is indeed a cold and meaningless chaotic place with no deeper meaning."

Here's a lot of numbers for you.

If it's a question of combat, print versions of either A Million Random Digits with 100,000 Normal Deviates (1955) or the full set of The Art of Computer Science (1968 - ...) carry some weight and double up as door stops or steps to reach the higher shelves.

Oh god. Okay. I feel like I've been preparing for this post my whole life (or at least since I found these awesome things on amazon):

One of my faves is the Million Random Digits book.

You haven't seen this book yet, then, I'm guessing.

These are actually the best reviews on Amazon.

Also check out the sequel!

Correction, nothing is random anymore. If you and I wanted to select a random number, we would have to consult this book.

I’ve had a fun time reading this,
still waiting for the index volume so I can find my favorite parts more quickly.

Just one table? Better get a million random numbers in case you run out.

this book has great reviews. this guy is a genius.

&gt; I cannot make an enormous file of random data and sell it, because it has no value.

Some of the other reviews are also quite funny.

Don't lots of random generators sample atmospheric noise to generate random numbers, things like that? ISn't the problem that something being apparently random is one thing, but a lot of "random" things are, perversely, predictably random.

*Or for a thrilling read: http://www.amazon.com/Million-Random-Digits-Normal-Deviates/product-reviews/0833030477

Depends on your application.

Hell, you can even just buy a book with lists of random numbers. This is how they used to do simulations before computers were common.

If you need something more secure, there are cryptographic PRNGs. The idea with these PRNGs is that if you don't know some special secret about how they were initialized, you can't predict future output just by looking at some current output. To an outside observer, the numbers coming out might as well be random.

I hear there's a good deal on the book A Million Random Digits with 100,000 Normal Deviates. Might be a scam, but if it's real I wouldn't hesitate to buy it.

&gt; there is absolutely no way for you to algorithmically discover the number in question.

Yes, but there is for you. If you see 5000 digits from that expansion, it's trivial for you to determine what the next 5000 digits are. (Indeed, it's kind of funky that "random" is almost as much a property of the observer as of the number.) When you're talking about cryptography, the ability for anyone to predict the next number in the sequence, given arbitrary amounts of the sequence already generated, is what's important.

Sure, if you're doing simulations or something, the fact that everyone uses http://www.amazon.com/Million-Random-Digits-Normal-Deviates/dp/0833030477 to get their digits is irrelevant. If you're doing cryptography, using this book as a one-time pad is probably a really bad idea.

Certainly there are numbers whose statistical properties are indistinguishable from randomly-generated digits. That's usually not good enough for cryptographic keying material, at least in an academic/crypto-design kind of setting. Otherwise, people wouldn't be manufacturing and selling the types of hardware this article is talking about.

The reviews on this one are great too: A Million Random Digits with 100,000 Normal Deviates

&gt;The only one I used.

No, name the major theory of truth you are using.

What? You don't think computers can be programmed to randomly choose numbers? Fuck, you're damn ignorant.

May I recommend some related material?

Maybe they'll allow this in prison?

I found it! I have no idea what it does but it looks interesting!

buy the book on Amazon

Forget the redditor feedback, all the numbers you need are right here. Now you have all you need to make some fancy graphs for us.

Maybe the teacher was demonstrating the sort of technique you'd use to pick a random number from a source like this?

If you give me a bunch of numbers in sequence out of the Random book, using mine, I'll be able to predict the next number at some point. Are you claiming that the numbers in the book are not random with respect to one another?

I think you need to "scope" (contrived term) the randomness, such that within the fixed 2^19937 - 1 MT sequence, the numbers are not measurably correlated with one another. For cryptography you need a world-scope, so you need to generate novel sequences.

For real randomization, there's only one way to play

&gt; If Herodotus had written about things not interesting for you, would you also be tearing him a new one?

Okay, I admit that I haven't actually read the entire works of Herodotus. But no, historical writing is allowed to be boring when it records valuable insights about the shared past of our species. Fiction doesn't.

&gt; Your aforementioned Ulysses and House of Leaves just as neatly break any established rules of storytelling. What, are they allowed to do that because they're not fantasy, or what?

They're allowed because they do it well. In the fantasy genre, ASoIaF subverts expectations all over the place, and yet still manages to maintain a compelling narrative.

&gt; Tell you what, personally, neatly established and told character arcs focused on one person accomplishing all the world-saving bore the living hell out of me.

Nowhere did I say a narrative arc needs to be neat, or personal, or world-saving. Would I have enjoyed the Chain of Dogs so much if I thought otherwise? The only thing it needs to be is an arc. There a few arcs in MBF, but a lot more dangling threads.

Does every book need a narrative arc? No. If I read A Million Random Digits with 100,000 Normal Deviates cover to cover, and then wrote a review condemning its lacked of relatable characters, I wouldn't expect much sympathy. But MBF is a least marketed as a series of epic fantasy novels, written by a human, for other humans. If Erickson's intent from the start was to confuse and frustrate his audience over ten years and three million words by subtly undermining the pillars of good storytelling, then I applaud his skill and apologize for my ignorance.