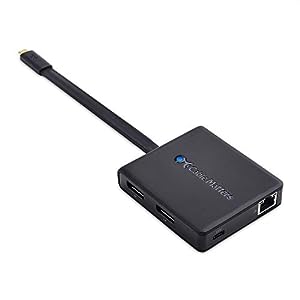 I picked up one of these and works really good with my dual dell u2515h monitors about the same price as the above one.

What you can do is buy a dual Displayport 1.2 Alt Mode adapter (example here)
and then connect two U2515H to it. For the third monitor you connect it to one of the Displayport Out ports of the two other monitors.

You could even connect all three monitors via Daisy Chaining, ergo no adapter required, just one USB-C to Displayport cable. However then the third monitor would only have a resolution of 2048x1152 @ 30 Hz. So for triple 1440p @ 60 Hz you need a adapter/hub.

Why on earth would you spend so much money on a dock? https://smile.amazon.com/Cable-Matters-Multiport-DisplayPort-Ethernet/dp/B0746NKVBN this is enough for you, I think at least.

&gt; I really see the usefulness of TB3 hubs only when one would also like to charge the laptop with just one cable,

Whatever you need! for 2x Screens, DP Alternate over USB-C can only really drive 2x DP @ 1440P 60hz before it runs out of bandwidth - Dual 4K @ 30Hz is possible but I don't consider that usable for normal work. Also you'll have to give up Gigabit Ethernet and USB 3 because of bandwidth limitations.


But it may fit your needs, Keyboard/Mouse/PD Passthrough and 2xFHD.


Otherwise you will have to go TB3 which is much more $$. If you want eGPU Lenovo has the TB3 Graphic dock w/ the 1050, however also be aware most eGPU Docks may have flaky compatibility with certain mice/keyboard, basically bandwidth allocation issues. It usually rears it's head when you have load on the GPU portion, seeing as the T480s only has twin lane, you could run into bandwidth issues under heavy load where USB connections may drop intermittently however this is a general issue with pretty much all current TI83 TB3 implementations which almost all eGPUs use.

Alternately, https://www.amazon.com/Cable-Matters-DisplayPort-Thunderbolt-Compatible/dp/B0746NKVBN/ref=sr_1_20?s=electronics&amp;amp;ie=UTF8&amp;amp;qid=1522865723&amp;amp;sr=1-20&amp;amp;keywords=dual+cable+matters cheap docks like that work for a lot of things.

If you don't mind using both usb-c ports at the same time, just get a simple DPP adapter for each.

You can use a USB-C dock that has 2 DisplayPorts, a couple of USB ports, and power passthrough, like this. Then use 2 DisplayPort to DVI cables. Then EVERYTHING on your desk will go through 1 cable.

I highly recommend the Cable Matters Thunderbolt/USB-C docks. These are the only ones we use, anymore - we ditched all of our Lenovo docks for them. Primarily, we buy the DisplayPort version, but I do have a pair of the HDMI ones floating around for when we need to hook up to a flatscreen at a conference or a projector or something. They don't need firmware updates, they're tiny (smaller than some external drives), and they just work. I have never had to troubleshoot one. And they cost a fraction of what Lenovo docks do. Love them.

this is the best USB-C based product on the market because besides 4K @60Hz it also allows charging, network and USB 2.0 devices.

I've elaborated all the basics here:

Not much help from me I'm afraid.

After a lot of research it seems all the 'good' options are way too expensive right now. I ended up going with a cheap 3rd party dock and I'll be sticking with my 1440 regular monitor until a reasonable option to run an ultrawide at 60Hz or more from a laptop with USB-C power delivery comes out.

So far as I can tell you're basically just looking at thunderbolt docks when it comes to higher res at a reasonable refresh rate. Built-in USB-C docks on monitors were all lacking in some way. Even Lenovo's official ThinkPad docks either won't run anything above 1080 at 60Hz, or have strange problems when powering higher res displays (like the gen 2 thunderbolt dock powering off / overheating randomly).

I ended up with the following as a solution for now, plugged into a x280 ThinkPad. It works ok but having a non-detachable short cord kind of sucks. Also I don't think this would power an ultrawide at 60Hz+ either, but a 2560x1440 is fine. All in all I'm dissapointed but will probably look into future docks offered by Lenovo in about a year. The current offering _should_ work but so many people seem to have issues that it's just a non-starter for me right now. I did find a list of docks offered by Lenovo and their supported resolutions / refresh rates, but it's lacking in some information.

It's a really nice device and I've had no issues with it, but I can't help but feel underwhelmed given how much it costs. Keyboard feels good, screen is nice (if not just a little less sharp than 4k offerings, but this helps battery life), and the build quality is as good as it gets. And I love the minimalist, flat slab look to it.

But there are several other competitive options available now that offer more for less, like the Spectre x360, Yoga C940, and of course XPS 13. Those have their compromises as well (usually in QC), but they're also hundreds of dollars less for better specs, better port selection, and a 2-in-1 design.

I don't mind paying a premium, but the SL3 just doesn't feel future proof enough for me to do so. I actually just bought an X1 Carbon Gen 7 yesterday because they're heavily discounted for BF. With my work discount, the i7/16GB/1TB/4k model was just $1584. It's not as flashy as the other laptops I listed, but blows all of them out the water otherwise. If I hadn't got that, I probably would have looked at the Spectre next rather than the XPS.

And I only have two of my 1440p monitors hooked up to the SL3 for now, daisy chained via a single usb-c to display port cable. Haven't had any issues. Looks like I could have got the third hooked up with an adapter like this or the official surface dock.

Get one of the two below, and update the firmware from their site:

Cable matters makes nice usb-c hubs that do everything you need and support dual monitors. They are cheaper than the official docks and work with or without thunderbolt. Cable Matters Dual Monitor USB C Hub (USB C Dock) with 2X 4K DP, 2X USB 2.0, Ethernet, and 60W Charging for Windows - Thunderbolt 3 Port Compatible

You can buy a usbc to displayport/minidisplayport adapter, then connect a mst hub to connect 2 or 3 monitors all at once either directly to two port adapter, or buy an additional mst hub.
e.g. https://www.amazon.com/gp/aw/d/B0746NKVBN/ref=mp_s_a_1_4?ie=UTF8&amp;amp;qid=1523723617&amp;amp;sr=8-4&amp;amp;pi=AC_SX236_SY340_FMwebp_QL65&amp;amp;keywords=usb+c+alternate+mode&amp;amp;dpPl=1&amp;amp;dpID=310B5ayd2oL&amp;amp;ref=plSrch


or get these displaylink solution
e.g. https://www.amazon.com/Plugable-DisplayPort-3840x2160-Thunderbolt-Compatible/dp/B074743NHP

there are two major approaches here:

Nothing is quite perfect! The Philips does look nice but doesn't have a VESA mount which is on my list of requirements.

This hub seems like it does everything I would want: https://www.amazon.com/Cable-Matters-Multiport-DisplayPort-Ethernet/dp/B0746NKVBN 4k DisplayPort @60Hz, USB ports, and power delivery.

The fast ethernet seems hilariously out of date and I'll still need to get an extra 60W USB-C charger to enable the power delivery.

Still going to hang on for Prime Day to see if there's some price movement on any of these options.

I use this guy cause I’m strapped to two DP monitors. Gets the job done but doesn’t support two monitors on Mac only PC. I switch between the two.