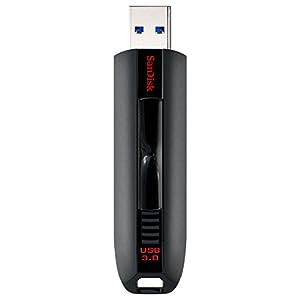 the sandisk extreme USB definitely has the best speed to price ratio.

These things are slow as hell. Spend a little more and get the extreme. This one goes about 4 Mb/s.

I have the older version and it gets to about 230 MB/s with my hardware config.

I had two CZ80s and they reached their specs for large sequential writes quite easily and remained stable for those transfers too.

1. If size is a priority then when I did research the Sandisk Extreme was one of the fastest usb drives:
https://www.amazon.com/gp/product/B00KT7DOSE/

2. If speed is your top priority simply buy a regular 2.5" ssd, and a usb/sata cable. It will be much faster than any thumb drive, basically the same speed as an internal sdd. This is what I do for backups it is really really fast.

I would not suggest the one you linked at all. USB 2.0 is a terrible idea especially for a drive of that size.

Yes you can. I got the USB stick below and it worked very well.

this one seems to the fastest one (64 gb sandisk extreme.) the lower capacity models are slower.

The one I have. Speeds are as promised, with 4k read/write of 10MB/s over USB3 and 6MB/s over USB2. Unfortunately I wasn't able to get Windows 8.1 To Go to boot from it, but Linux works beautifully with SSD-like boot times, even over USB2.

I have this configured with a 15GB Linux partition that I can boot any computer from, and a 45GB NTFS data partition that stores all the rest of the stuff.

I should point out that this isn't an SSD, so it isn't really recommended to run an OS off of it due to the memory not being designed for it. SSD memory is quite a bit more durable. If you want something like this that will primarily be used to run a portable OS, I recommend investing some more money and getting a larger one with an SSD controller and higher-quality memory.

EDIT: Get the 64GB version, since speeds decrease pretty drastically with the 32GB and 16GB models.

My old, reliable 4GB PNY Attaché USB 2.0 flash drive is 100 MB too small for the Windows 10 Technical Preview x64 install iso to be written to it fully with the Novicorp WinToFlash program I use. I like to dual/multi-boot, and I figure it's time to come into the USB 3.0 world with a new bootable flash drive so I can install operating systems with it.

However, it appears that most newer flash drives are "fixed" drives, meaning that I can't boot from them. My motherboard has USB 3.0 ports and also supports booting from USB 3.0 drives, so there's not a problem other than finding a flash drive from which I can boot to install operating systems.

I was looking at this Sandisk Extreme 64GB flash drive, and found this comment on it, which deterred me from purchasing it. As it turns out, the vast majority of recent drives are exactly the same way. I already have an SSD, so I don't need a fixed drive, I need a removable one.

Does anyone know of a specific bootable USB 3.0 drive with 32-64GB of space and read speeds over 100MB/s, preferably closer to the linked drive's 245MB/s? Write speed isn't as much of a consequence, as it'll only be written to when I change operating systems. 190 MB/s write speed like the SanDisk one would be great, though.

Not necessarily. Get this one: SanDisk Extreme USB 3.0.

I've done exactly what OP is talking about with this drive, no issues. Actually, it was a speed up compared to the magnetic disk drives I was using before.

with mining your going to have a rude awakening lol, I am a programmer by trade and profession, I use linux myself though I will tell you after building dozens of rigs, and owning several myself, windows is the easiest for mining unfortunately, easier to maintain and easier to fix when shit goes wrong.

Though to each their own and I wont push you into windows if you dont want to, though when you go into linux and you cant seem to achieve the same hash rate as windows and have a hell of a time getting it there if you can, you may fall back to windows anyways lol.

Though to answer your question, windows doesnt like to run on usb's at all there is only a handful of usb's it will or can be installed on and be useable that way, you need to find a USB that supports UEFI and is basically a SSD on thumbdrive.

I only know of 2 drives that do this:

adding to this build, i'll change:

Follow-up /u/christianjackson: Does anyone have experience with the [Sandisk Extreme CZ80] (https://www.amazon.com/gp/product/B00KT7DOSE/ref=as_li_tl?ie=UTF8&amp;amp;camp=1789&amp;amp;creative=390957&amp;amp;creativeASIN=B00KT7DOSE&amp;amp;linkCode=as2&amp;amp;tag=prdjtu0f-20&amp;amp;linkId=AUKE2VBZH7SPTTSE) which was linked from the video? Not sure if that was listed or not.

I have a USB thumb drive with One Piece Unlimited World Red loaded onto it. Plays fine. I don't buy into the powered hard drive requirement.

Yes, a USB 3.0 flash drive will be faster than an internal hard disk drive. And are fairly cheap as well. http://www.amazon.com/gp/product/B00KT7DOSE/ref=oh_aui_detailpage_o00_s00?ie=UTF8&amp;amp;psc=1

And it's just stupid fast. Easily the fastest flash drive I've ever seen.

I back up all my pics and documents to google drive however. $2/month for 100gb.

Given that she has an iphone I would use the icloud.

I wanted to test my new USB 3.0 Sandisk flash drive and just copied my User folder from my SSD because I figured it would be fastest from the SSD, although I know even with a HDD the bottleneck is the flashdrive. At parts of the transfer it will write close to 200 MB/s which Sandisk listed as max, but for a majority of the other time it stays below 20MB/s. Anyone know why this is?

It's definitely plugged into the USB 3.0 port at the front of my R4.

This one is way faster.

I do not carry a flash drive but I do recommend this one..

Checkout.. /r/flashlight for further suggestions on a small light.. but make sure that you fill out the form so people can steer you the right way!

Agreed, I've used USB 3.0 drives capable of "Read Up To 245MB/s; Write Up To 190MB/s" (SanDisk CZ80) with my Nextcloud setup and the biggest limitation has been the USB 2.0 bus shared with the Ethernet controller. Best throughput I've gotten is around 15-20MB/s (megabytes per second).

I'm wondering if there is any benefit to doing this RAID locally (vs. creating a remote mirror periodically updated via a rsync cron job).

SanDisk Extreme USB 3.0. I believe it is advertised at 245 read 190 write, and I get pretty close to those speeds in practice for large files. It also has very impressive random 4k performance, so copying lots of small files is way way faster than a cheap USB drive, too. The drive itself is a bit big, but not so much that I've had any problems with it blocking other USB ports to the side when it's plugged in. All in all, a really great USB drive.

Edit: Look at the random 4k writes on this chart. This is what I'm talkin' about. SanDisk is not highest on 4k reads (but is still competitive), but just destroys everything else on 4k writes. Only 2 competitors even get within 1/10 of the SanDisk's 4k write speeds.

next time put windows on this and boot through a usb 3.0 port. takes less than 20 minutes to install windows this way.

Ah yeah gotcha.
I've got one of these

Well a quick search shows you can get a 500gb harddrive close to a$50 price point. I also know that WD includes a 3 year warranty.

That said, flashdrives are a good option, just keep in mind they can also break if you are a power user (and manufacturer's warranty tend to be shorter). Ones with slider mechanisms are particularly vulnerable but the good thing is data survives slider breakages.

With flashdrives I'd look at either the SanDisk Ultra Fit or the SanDisk Extreme. The first is pretty fast (no matter what you choose, go usb 3.0 with decent read speeds) and is nice and small so can sit in your computer 24/7 (with the sacrifice of some extra power drain) and the second one is super fast. Both come in 64gb options, unsure if you will be able to get anything over 64gb at a $50 price point.

Bought one of these last year, slow as hell compared to the Sandisk Cruzer Extreme models. Bought one of these for work and they are insanely fast and I abuse the hell outa the stick and its still going strong over a year. Retractable 4 life!

You are misinformed. As fb39ca4 said, any mechanical hard drive (laptop or desktop) can saturate USB2 with ease, unless you are reading many different sections of the disk simultaneously.

Any sata SSD, no matter the age, will saturate USB2. Easily. I have an old, cheap mSata drive on a $7 msata-usb adapter that will deliver 450MB/s (megabytes, not megabits) reads and 150mb/s writes all day long. Read speeds are actually handicapped by USB3 controllers at this point; even the slowest ones (Renesas/NEC under Windows 7) still deliver 250mb/s reads if the drive is capable.

Even the worst USB3 flash drives can easily exceed USB2 speeds in reads, though not in writes. A high end flash drive like the sandisk extreme pro ($31) absolutely smokes USB2, with read speeds of about 200-250MB/s, and writes of about 130-160MB/s.

You do realize all of the "value" USB 3.0 sticks perform worse than a quality 2.0 flash drive? A good quality USB needs a SSD controller, high quality NAND, and a good 3.0 controller. If a manufacturer skimps on any of these, the end product will suck.

Here's a good stick that runs just as fast as a SSD because it is essentially a SSD.