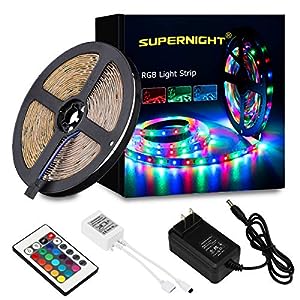 These color LED lights are super cool and cheap on Amazon. You can change colors and patterns with a little remote control! https://smile.amazon.com/gp/product/B00BP4DUMU/ref=oh_aui_detailpage_o04_s00?ie=UTF8&amp;amp;psc=1

P.s. the adhesive on the strips are mediocre, I had to eventually strap then down with duct tape. Works like a charm other wise though.

You can add cheap lights to any case. Won't be controllable through software, but will still be RGB.

&gt;If it doesn't look cool he won't be interested in it

That sounds like the opinion of a brat imo.

When I was a kid and my older bro built a PC (he's significantly older), I wanted one too. He said if I helped him work off the debt he would help me buy/build my own. It wasn't much, but it was enough to play basic games, and the process helped me learn more about the hobby on my own. I was ecstatic because it was my own personal build. Plus, it gave my brother and I something to bond over, even with the massive age gap.

This project is about a lot more than building a shiny rig, bro.

These are pretty dope. I turn them on every time I smoke.

I bought this set off of Amazon but I scrapped the included power supply, unsoldered the 2.1mm barrel connector and wired up a spare 4-pin molex cable I had with a build in power switch. You can change the color with the little IR remote, but they aren't individually addressable so the whole strip changes color at the same time. I ran out of time wiring them up the other day so I only have about half the strip in there right now, need to solder the rest of them together.

Mmmm, the ones I'm finding aren't quite the same. Nothing is exactly like this setup but, I think you could achieve similar results with something like these:

Amazon very simple example, not quite the same, hence me saying you won't get a matching project without DIY

You'll notice that a lot of these are DIY/custom which is a huge point--most really well-done LED lighting art pieces are done by hand, not bought from the store. It's really easy to do actually, as LED light strips are cheap right now, 15 ft multicolor for &lt;$1/ft.

The takeaway here is creativity is king.

LED Ropes are almost always garbage. Plus, a lot of them use incandescent (like small xmas tree lights) bulbs on AC instead of actual LEDs running DC (which can make it portable, whenever necessary).

The first question I'd ask you is how "cool" do you want it to be? I don't mean color temperature, I mean are you just looking for a plane white source that can be switched off and on? Or would you be wanting it to do multiple colors (even multiple colors on each LED, as opposed to the whole thing lighting a single color at a time)?

Originally, these were/are designed to be backlit from a set of long CFL bulbs like you'd see in a corporate office setup. The bulbs are fairly energy efficient, cheap, and don't produce "hot spots" (where you can directly see a light source, or its shadow, through the sign) nearly as much as LEDs or Halogen/Incandescent.

All that said, I'd recommend one of the following three methods:

Can't speak for OP but I have a lot of experience with LEDs.

There are two parts to an LED setup.

Link to product (as opposed to a screenshot)

If you're up for a little bit of DIY, I have strips of LED lights in my room and if you bought something similar I'm sure you could mount them to 2x4 boards that have been spray painted black or something. A trigger for them is relatively inexpensive, and the lights are extremely bright in a dorm room,

I think this is the pack we got, and then we switched in a sound responsive trigger.

if you want to pay a bit more for even better stuff, these are good lights as well
http://www.lightingever.com/rgb-led-strip-non-waterproof.html?gclid=CJn8iZSP98ECFYHyMgodvgcA-Q#info-tip

If you have a 3d printer you can print some of these. https://www.thingiverse.com/thing:1244670

Amazon has LED strips that you can use, or get them for cheap from Aliexpress.

Hey. I bought mine in some local store but it was some most basic kit like THIS. Try to find it cheaper. LEDs are usually overpriced in most of the stores.

I'm planning on getting these ones.

OP's are 5050 which are great, but they can only display one color at a time. The 3528 can have multiple colors. I've been doing research on this, because I want to make this

Basically I installed this in the back of my TV: LEDs

This is the shadow cast from it. Looks pretty nice.

or if you want just white:
https://www.amazon.com/Flexible-Non-waterproof-Christmas-Decoration-Daylight/dp/B00HSF65MC/ref=sr_1_3?ie=UTF8&amp;amp;qid=1503362825&amp;amp;sr=8-3&amp;amp;keywords=led+strips

NZXT 820 Gunmetal Crow and some LED strip like that
http://www.amazon.com/SUPERNIGHT-Changing-Flexible-Remote-Control/dp/B00BP4DUMU/ref=sr_1_13?ie=UTF8&amp;amp;qid=1452866918&amp;amp;sr=8-13&amp;amp;keywords=led+strip
You should order double faced tape extra tho, since this doesn't include any option to tape it to the back of your table.

SUPERNIGHT LED Strip Lights -... https://www.amazon.com/dp/B00BP4DUMU?ref=ppx_pop_mob_ap_share - These are good for the price but I recommend the brand 'Daybetter.' They're more expensive but good and they're waterproof.

I think most people use these ones.

Personally use Ever Lighting and they have been good for the past 4 months and I keep them on for like half the day.

However, I think they only really sell white ones. Since I lived in Canada and didn't care for color, I went with them.

These lights here are pretty good for any man cave https://www.amazon.com/SUPERNIGHT-Changing-Flexible-Remote-Control/dp/B00BP4DUMU/ref=sr_1_2?ie=UTF8&amp;amp;qid=1497136898&amp;amp;sr=8-2-spons&amp;amp;keywords=led+light+strip&amp;amp;psc=1

And if you want to spend some money on a good frame job for a jersey I got mine from Detroit City Sports. It's about $300 but they do a really nice job.

Absolutely. That's the plan. I think maybe a custom build "picture frame" from the local micheals or other craft hobby store, then some Ikea hinges that soft close. Then just glue a sheet of plexiglass in there. I'm also thinking of throwing in some of these in:
https://www.amazon.com/SUPERNIGHT-Changing-Flexible-Remote-Control/dp/B00BP4DUMU/ref=sr_1_3?ie=UTF8&amp;amp;qid=1487363421&amp;amp;sr=8-3&amp;amp;keywords=smd+3528+kit

This basic remote that comes with LED strips usually:

The battery is fine and it works but I realy want to be able to point it in different angles and still be able to use it because no I need to be 1m or closer and aim dirrectly to it and the reciever is in pretty uncomfortable spot so I have to walk there everytime and put my hand behind shelf to change colors. Maybe I can modify the remote and/or reciever to be able to do it from ~5m and in different angles too? I understand that I cant point the remote away and hope that it will work but cmon I can't be wrong by 0.5 degrees now if I want it to work now....

Yeah man. Really cheap and easy to set up from Amazon

On a more serious note, frames for your posters would be an easy and cheap way to clean things up a bit. Also, rbg lighting can be as simple and cheap as this: https://www.amazon.com/dp/B00BP4DUMU/ref=wl_it_dp_o_pC_nS_img?_encoding=UTF8&amp;amp;colid=2Y1AKJUEGPG2U&amp;amp;coliid=I9D60H4E01TR6

You may also want to order some corner connectors, they are about 5 dollars for a pack of 5

Download the app for the controller and you can customize it fully via your smart phone.

Edit: sorry missed your second link. Strip lights are really cool for this sort of thing.

You can get more light for less money with something [like this] ( https://www.amazon.com/SUPERNIGHT-Changing-Flexible-Remote-Control/dp/B00BP4DUMU/ref=pd_lpo_vtph_60_bs_lp_t_1?_encoding=UTF8&amp;amp;psc=1&amp;amp;refRID=VYTEMD7121QBJR0WQDX9) if you don't mind a little diy.

I don't remember exactly what I bought but here are a few cheap LED strips that are similar to mine and well reviewed!